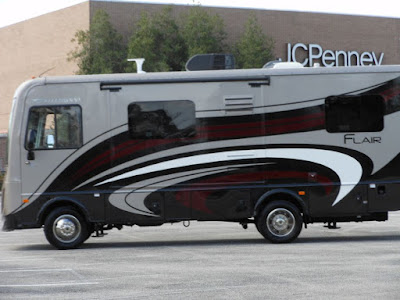 Back in the spring of 2016, Geoff and I took the plunge and got a motor home which we named Timmberwolf. I blame my oldest son for our decision!

Mark lives in Arizona and we talked often about his coming to visit but as a business owner he just never seemed to be able to break free and my physical handicaps made it difficult if not impossible for me to make the trip.

The principle issue was I need to be able to get to a bathroom when the urge strikes. You really can not do that out on the road or flying but then we had the brilliant realization that I could in an RV.

From 2016 through 2019 we made about a dozen trips, some short and some extensive. I blogged about them here on this Timmberwolf blog here at blogspot although I often got way behind on the posting. We have been a lot of places, seen a lot of things, (got a bunch of souvenirs) and spent time with various parts of the family all of which would not have been possible without Timmberwolf.

Then came last year and Covid-19. We weren't frightened by it but at our age and with some additional medical issues it was at least concerning. I was at greater risk than Geoffrey so he undertook all the outside errands and such and I pretty much stayed home. We had hoped to make a couple of shorter trips in 2020 but Covid said NO! so we scrapped those plans.

By 2021 it was clear I wasn't going to be able to make any more trips in the RV. For those who wonder, I didn't get much worse except in the predictability department. There are many weeks I can look back at and see I could have traveled but the problem is I only know with hindsight. Anyway, at this point it was clear we should just get rid of Timmberwolf. The debt on it was still high enough we would end up paying some in addition to what we could get for it but there was also the ongoing added expenses of keeping it somewhere and insurance coverage.

So, end of April we took all personal stuff out of Timmberwolf and took the plunge, taking Wolf to Campers Inn for an estimate etc. It was worth less than we had hoped but just getting out from under it all would still be worth it. For the balance that would be due on the loan we needed to refinance the house so on the 3rd of May we contacted our mortgage holder, Wells Fargo, and started the process.

Two months later we still sit here waiting on Wells Fargo who told us yesterday (July 1st) it would be at least two more weeks because of subcontractor backlogs. All the required paperwork has been submitted (some of it more than once) so I am not sure what we are waiting on but two months is ridiculous.

Wow! News! Geoff just came into my hideaway here and showed me a copy of an email he just got from the closing company ... July 13th! Hopefully this will work out and won't get mangled because we have had to make another payment on the RV loan and on the house loan. Cross your fingers for us everybody!